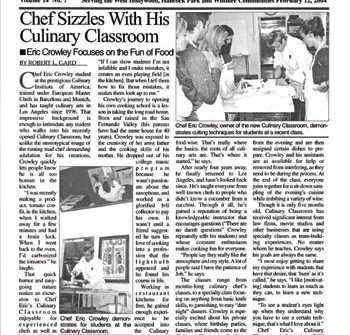 Chef Eric Crowley studied at the prestigious Culinary Institute of America, trained under European Master Chefs in Barcelona and Munich, and has taught culinary arts in Los Angeles since 1996.  That impressive background is enough to intimidate any student who walks into his recently opened Culinary Classroom, but unlike the stereotypical image of the ranting mad chef demanding adulation for his creations, Crowley quickly lets people know he is all too human in the kitchen.

“I was recently making a product, tomato confit, in the kitchen, when I walked away for a few minutes and had a brain lock.  When I went back to the oven, I’d carbonized the tomatoes,” he laughs.  That quick humor and easy-going nature makes an excursion to Chef Eric’s Culinary Classroom enjoyable for experienced chefs as well as the kitchen novice.  “One of the things that separates me from others is I don’t go around acting like I’m a know-it-all in front of students,” he says.  “If I can show students I’m not infallible and I make mistakes, it creates an even playing field [in the kitchen]. But when I tell them how to fix those mistakes, it makes them look up to me.”

Crowley’s journey to opening his own cooking school is a lesson in taking the long road home.  Born and raised in the San Fernando Valley (his parents have had the same house for 40 years), Crowley was exposed to the creativity of his artist father and the cooking skills of his mother.  He dropped out of his college music program because he wasn’t passionate about the saxophone, and worked as a glorified bill collector to pay his own.  It wasn’t until a friend suggested he turn his love of cooking into a profession that the light bulb appeared and he found his course in life.

Working in restaurant kitchens for free, he gained enough experience to be accepted into the Culinary Institute of America in New York.  From there it was off to Europe for two years for training under fire.  “I went to Europe to get experience not only culturally, but food-wise.  That’s really where the basics, the roots of all culinary arts are.  That’s where it started,” he says.  After nearly four years away, he finally returned to Los Angeles, and hasn’t looked back since.  He’s taught everyone from well-known chefs to people who didn’t know a cucumber from a zucchini.  Through it all, he’s gained a reputation of being a knowledgeable instructor that encourages questions  (“There are no dumb questions,” Crowley repeatedly tells his students) and whose constant enthusiasm makes cooking fun for everyone.  “People say they really like the atmosphere and my style.  A lot of people said I have the patience of Job,” he says.

The classes range from months-long culinary chef’s classes, to a specialty class focusing on anything from basic knife skills, to garnishing, to easy “date night” dinners.  Crowley is especially excited about his private classes, where birthday parties, families and friends come to the Culinary Classroom for three hours and learn the culinary arts together.  In the specialty classes, students are given a brief introduction to the recipes and ingredients from the evening and are then assigned certain dishes to prepare.  Crowley and his assistants are as available for help, or removed from interfering, as they need to be during the process.  At the end of the class, everyone joins together for a sit-down sampling of the evening’s cuisine while imbibing a variety of wine.

Though it is only five months old, Culinary Classroom has received significant interest from law firms, movie studios and other businesses that are using specialty classes as team-building experiences.  No matter whom he teaches, Crowley says his goals are always the same.  “I most enjoy getting to share my experience with students that have that desire, that ‘burn’ as it’s called,” he says.  “I like [motivating] students to learn as much as they can, to learn a new technique.  To see a student’s eyes light up when they understand why you have to use a certain technique, that’s what I love about it.  Chef Eric’s Culinary Classroom is located at 2366 Pelham Ave., just off of Pico Boulevard 1 block east of Overland.  For information, call (310)470-2640 or visit www.culinaryclassroom.com.

No Responses to “Beverly Press”

Register for our Free Newsletter

CHEF ERIC‘s instruction and encouragement helped me embark on a new career path. I began training at the Culinary Institute of America and am thrilled with my decision.

The classes (both courses) were great, so informative and so much fun. Chef Eric has such a wealth of knowledge and such a great, encouraging way of teaching and supporting creativity …….

The program exceeded all expectations that I had when I signed up. Chef Eric is amazing, patient, and very knowledgeable…. Best 10 Weeks ever!

I just want to say how much I have enjoyed this program, how much I have learned! My confidence in the kitchen has grown and the entire experience has deepened my love for cooking. Who says you can’t teach old dogs new tricks! Thanks to you both.

I completed Chef Eric’s Master Baking Program after college. I wanted to challenge myself to produce more professional-looking results; the course helped me accomplish that and much more. I loved the supportive environment and felt that my newly-acquired skills truly helped me turn a corner in my baking. Chef Eric needed some extra hands in the kitchen; I jumped at the opportunity to assist some of his classes and learn more about baking—a job for which I am eternally grateful. I am constantl…

I referred a friend of mine and her sister and niece to your school. They took your Chicken Connoisseur Class and loved it. I knew they would because your school is the best in Los Angeles.

Dear Chef Eric and Jennie:  Thank you for a wonderful class to celebrate my birthday!  Ever since my first cooking class there, I’ve wanted to have a private party.  It was worth the wait!  Everyone had a tremendous time!  I look forward to future classes. Sincerely, JoeBob

I had a great time in your class Eric. You’re a terrific teacher- patient, knowledgeable and fun. I plan on taking another class soon.

Really great place to learn how to cook! Whether you’re just on a date night, or want to get your skills in the kitchen up, or change careers, Chef Eric has you covered! He’s really great with managing an entire room of various-skilled individual strangers. Even when someone asks a question that, let’s just say, shows their lack of skill, Chef Eric is always 100% positive, patient, and reassuring. This could sound like a paid advertisement if I keep going, but believe me, I am speaking only the …