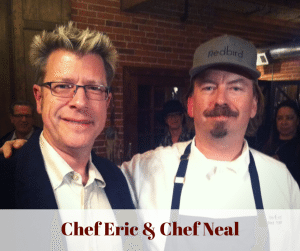 On Wednesday, February the 6th, I was invited to the Carondelet House in Los Angeles to attend a dinner cooked by one of our great local Chefs, Neal Fraser.  Like me, Neal is a graduate of the Culinary Institute of America.
About 44 of us attended, everyone was a social media influencer.  Some of the guests were interior decorators, some were reporters and some were bloggers. It was a pleasure to get to know each of them, as well as to be quoted in a variety of publicationsafter the fact.
At 7:15PM, Chef Fraser came out and thanked all of us for coming.  He said what he would be serving us a meal with “experimental ingredients.”  Naturally, we were all excited about what these ingredients could be.  I personally took it to mean that every dish was going to have some single ingredient included that you wouldn’t expect.
The first course was an Avocado Soup with a Sour Cream Espuma.  The soup wasn’t particularly special-I personally crave Guacamole or Ceviche when I work with avocado.  One thing that did stick out to me was that the Black Pepper used in the dish did have a slight bitterness to it.  Other than that, it tasted like mildly seasoned avocado and sour cream. 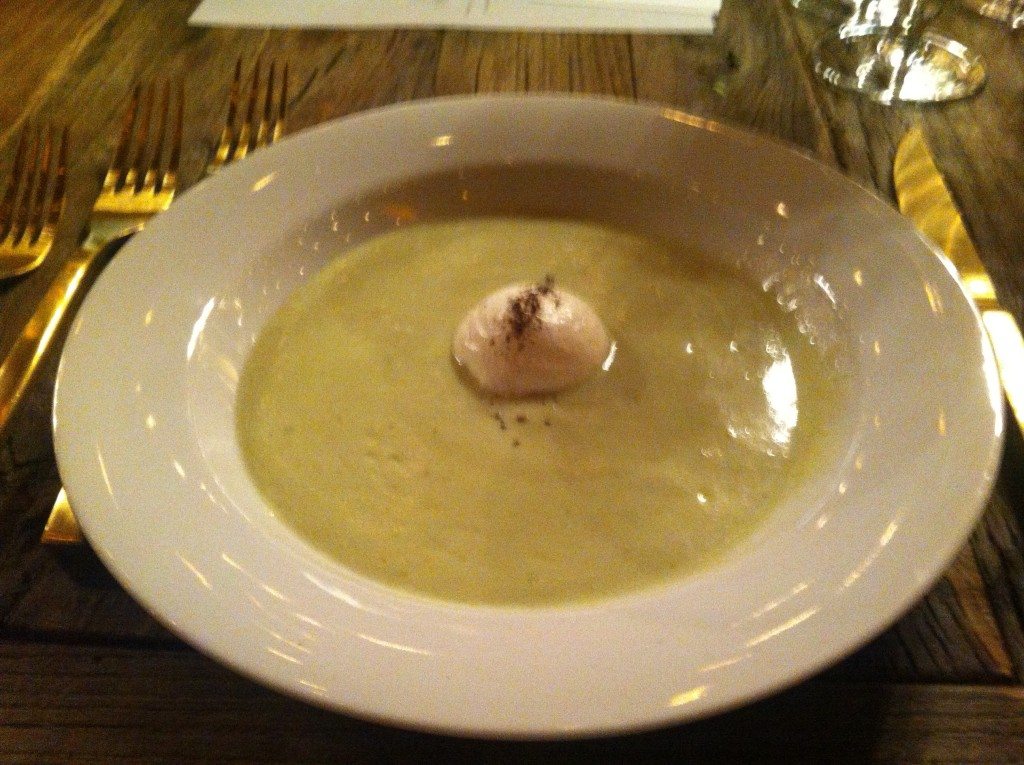 The second course was a Mixed Green Salad with Buttermilk Dressing, Garlic Croutons and Grape Tomatoes.  The greens and tomatoes were very fresh and of very high quality.  However, the dressing didn’t have that Buttermilk tangy taste that I have come to expect.  It almost tasted like heavy cream thinned with whole milk.  The Garlic Crouton (I had one on my plate) did not have any garlic flavor. 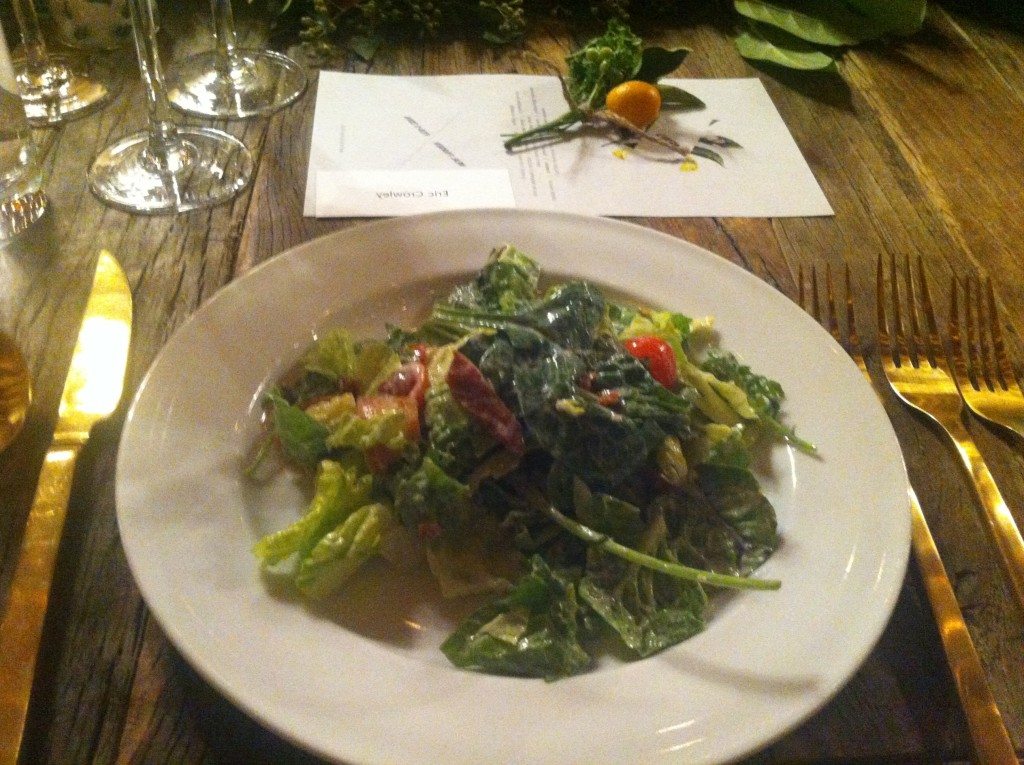 The third course was a Meatball with Spicy Tomato Sauce.  I tasted the same bitterness from the Black Pepper that I tasted in the Salad.  The guests around me were wondering what type of meat was being used.  I ruled out Veal (not here in L.A.), Pork would be too restrictive as well.  So, it must be Beef.  Some of the meatballs were a little on the medium side, with a small amount of pink in the middle of the meatball.  My neighbors at the table spotted that too, but I reassured them that it is O.K.  The sauce did have a little spice to it, but not like an Arrabbiata.  It seemed to be Ketchup-based (I would find out later how right I was).  Chef Fraser finished the plate with some toasted bread crumbs, which is always a nice touch. 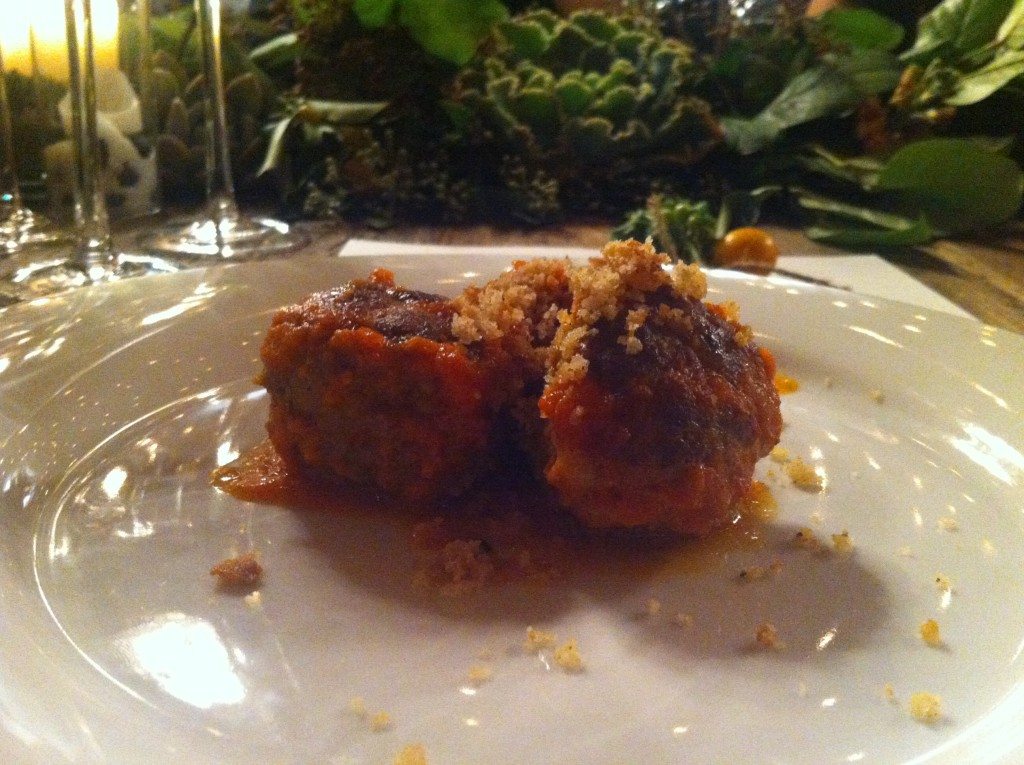 Just a side note, there was a big crash a few minutes before the meatballs were to be served.  Perhaps some finished plates were accidentally dropped?  This would have resulted in Chef Fraser quickly getting new meatballs cooked and that may be why some of them were a little pink.  Mind you, I don’t mind a meatball that is cooked medium, with a little pink in the middle.
The next course was a Bacon-Wrapped Chicken Breast with a Corn and Potato Hash with Black Beans and Canadian Bacon.  The chicken was cooked perfectly with a good amount of moisture still in the meat.  Some of my tablemates thought that it might be Sous Vide.  When it came to those around me to describe what Sous Vide is, they turned to my expertise.  I edified everyone that wanted to know!  The hash was very nicely plated with the chicken, I thought I tasted some seedless jalapeno, but it was very mild, so it was probably a bell pepper or even a mild green chile, like the kind Ortega sells in a can.  Yes, I was contemplating that Chef Fraser was working with some pre-made ingredients. 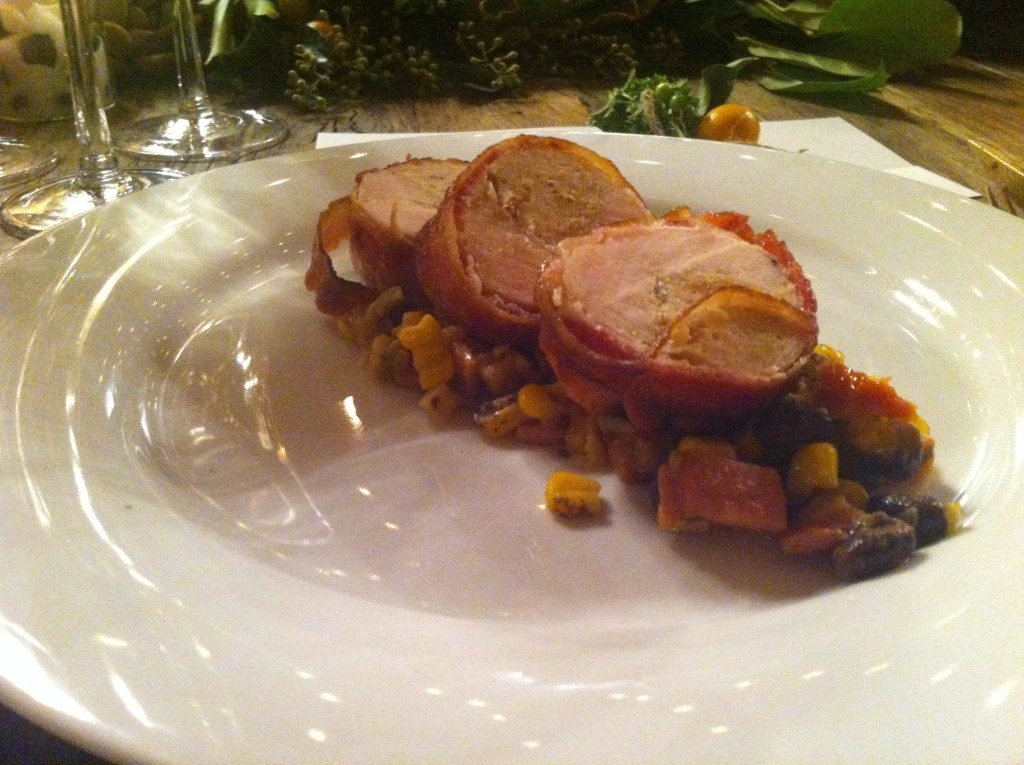 Dessert was a Coffee Custard with Blueberry Compote with Streusel Topping and Maple Butterscotch Soft Candy.  The coffee flavor was very strong without any sweetness to it.  So I tried the custard with a little compote and topping.  Better, but still not very sweet.  A Quenelle of Crème Chantilly was used to garnish that custard and that tasted unsweetened as well.  Don’t get me wrong, I love coffee, but this seemed better suited for drinking (before it was tempered with egg yolks and cooked in a water bath). 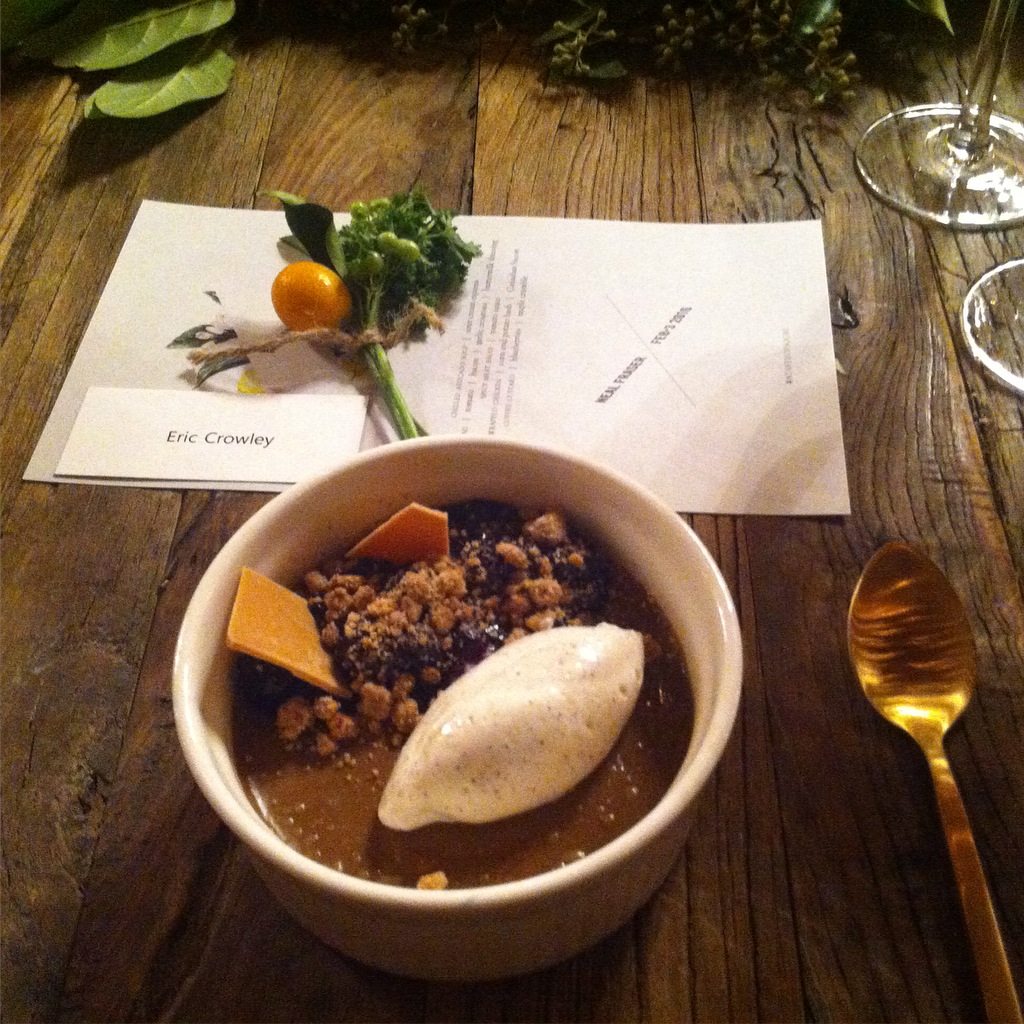 After the meal, Chef Fraser came out and told us that all the ingredients are exactly what you would find at your local McDonalds!  Now it made sense!  Since Chef Fraser only had those ingredients to work with, salt and pepper were the only seasonings available to him.  He made the meatballs from the same ground meat that the burgers some from. The chicken was from Tyson, which he said is the same purveyor that he uses in his Restaurants.
I must take this time to really extend my heartfelt congratulations to Chef Fraser.  He and his staff did an amazing job with all of the food!
I also took a look at the kitchen.  What can I say; I’m a chef, and for the last 13 years, I’ve owned and operated a Professional Culinary School, and I always want to see kitchens.  It reminded me of my days at Patina Catering – it had a couple of folding tables, a few butane burners and a rented propane convection oven and that was it. To cook this meal in that sparse of an environment is not easy.
Last but not least, whenever I am on a long road trip with my wife and our two dogs, we do stop at McDonald’s drive through for a quick bite.  Their French Fries are still fantastic, but I wish they would bring back that Angus Burger!
What an interesting dinner and enjoyable evening.  From talking with the Franchisees that were there – keep an eye out for big changes at McDonalds.

Chef Eric was also quoted and had his Instagram images featured on several local and national on-line publications:

Best expenditure to date. Very comprehensive, hands on course that lets you go home with skills.

Lucas had so much fun. The first day I picked him up from cooking he had a huge smile on his face. He said mom, I love the class!

My wife volunteered my services as Chef for a New Years Eve party for 3-4 couples. Your class has given me the confidence to create a masterful meal that will be served on time, look fantastic and taste even better.

I completed Chef Eric’s Master Baking Program after college. I wanted to challenge myself to produce more professional-looking results; the course helped me accomplish that and much more. I loved the supportive environment and felt that my newly-acquired skills truly helped me turn a corner in my baking. Chef Eric needed some extra hands in the kitchen; I jumped at the opportunity to assist some of his classes and learn more about baking—a job for which I am eternally grateful. I am constantl… END_OF_DOCUMENT_TOKEN_TO_BE_REPLACED

I began considering a new career in the culinary world and because I worked full-time in an office, I needed a program that was professional, personal, easily accessible and budget friendly. The Master Chef Program at Chef Eric’s Culinary Classroom fit the bill! Chef Eric has a passion for instruction and I greatly benefited from his vast knowledge of cooking, as well as from his experiences as a professional chef in restaurants and catering. The course was extremely organized with well-outlined… END_OF_DOCUMENT_TOKEN_TO_BE_REPLACED

Really great place to learn how to cook! Whether you’re just on a date night, or want to get your skills in the kitchen up, or change careers, Chef Eric has you covered! He’s really great with managing an entire room of various-skilled individual strangers. Even when someone asks a question that, let’s just say, shows their lack of skill, Chef Eric is always 100% positive, patient, and reassuring. This could sound like a paid advertisement if I keep going, but believe me, I am speaking only the … END_OF_DOCUMENT_TOKEN_TO_BE_REPLACED