Chef Eric hosted television shows at the Culinary Classroom including NBC’s Channel 4 Reporters for a Cooking Class Session, Good Day LA, Channel 11’s Morning Show, as they joined him live to see the Children’s Summer Cooking Camps in action. E! Entertainment, Your LA on Channel 4 and Cosmo Times as they showcased his Couples Romantic/Date Night Cooking Classes, TruTV on Upscale with Prentice Penny showcasing his cooking style, and the Associated Press as they highlighted our Children’s Summer Culinary Camps.
He has visited Television studios including KCAL 9 News for a Holiday Entertaining cooking segment, KTLA 5 Newsfor a Super Bowl cooking segment, Mother’s Day Brunch cooking segment, and Tailgating Grilling cooking segment featuring Chef Eric’s Savory Seasonings – Sizzle and Smooth Spice Blends, and Hallmark’s Channel’s Home and Family Morning Show teaching Candace Cameron how to make Sushi! He has been a Guest Chef on CitiCable 3’s Community Cooking Television in Torrance.
He and the Classroom have been featured on SoCal.com and LA’s The Place – Los Angeles Magazine at lastheplace.com.  He has been written up in the Los Angeles Business Journal, The Orange County Register, the Beverly Press News, Valley Scene Magazine, The Daily News, Voyage LA Magazine, and many other publications and Cooking Blogs sharing his love of cooking and many recipes.

Hi Chef! My daughter, Makenna, and I were in your cupcake class on Saturday and we had so much fun and just finished our last cupcake today. I am ready to bake tomorrow and impress my friends with your delicious recipes! Thanks!

Hi Jennie, I received an email from Lucas’s mom and thought you might enjoy it. “Lucas had so much fun. The first day I picked him up from cooking he had a huge smile on his face. He said mom I love the class. I have not seen him smile like that in such a long time.” Thank you for providing our children with free cooking lessons. It makes a difference in their lives and their families as well.

I had a wonderful Culinary experience. I learned many new techniques as well as the order in which to prepare each dish. The intimacy of the classroom allows one to ask many questions.

I had the best experience in this class, and Thank you Chef Eric for your teaching, support and enthusiasm. I have grown to know all of you as my friends,  My Ohana, My family. I have never met a greater bunch of folks, I left each class smiling as a result of not only creating dishes, but because of the fun we had, the laughter. Absolutely Priceless.

My career takes a lot of my time.  Chef Eric realized that I wasn’t looking to change careers and become a professional chef, but he still gave me the tools I need to be confident enough in my home kitchen.  I just hosted a party with 50 guests in my home.  I did the cooking myself, enjoyed every minute and my guests were very pleased.  My party was a complete success!

Dear Chef Eric – Thank you 🙏 for an amazing culinary camp last week. My kids had an absolute blast learning how to make such great food from scratch in Culinary Academy 1. They enjoyed and kept engaged through the end. I was very impressed at the high culinary level of this camp for kids, but was pleasantly surprised that they could complete it independently. The recipes are fantastic and food tasted superb!!! Thank you for this fun learning experience for our family!! ❤️ 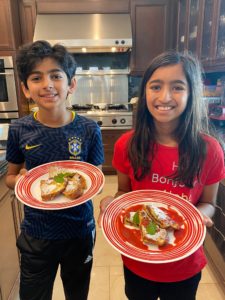 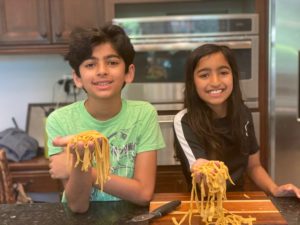 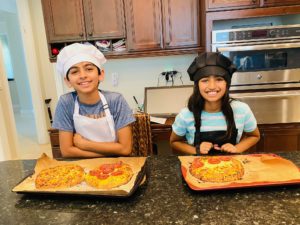 I’d developed a flair for Baking, and used to do tons of it at home. I was looking at doing some professional Baking courses when I came across Chef Eric’s Culinary Classroom Master Baking Program. I’m glad I chose this program as the course was really detailed and focused on the right techniques and helped me fine tune my Baking. Since then I’ve moved to Bangalore, India, however I’ve kept in contact with Chef Eric and he still helps me answer my Baking queries.

I came into this experience nervous and uneasy in the kitchen. I’m happy to say that I’ve emerged bold and confident! Thanks to Chef Eric and his crew, I’m looking forward to a lifelong love of cooking and entertaining. On a side note, this class is also great to take with a significant other. It’s a fun and creative way to spice up a relationship!

Thanks to CHEF ERIC’s CULINARY CLASSROOM and his Culinary Chef series, I was able to gain the confidence to pursue a new career. If you’re thinking about taking a class (professionally or recreationally), don’t wait!

Get the latest tips delivered to your inbox! Join now and receive a FREE VIDEO CLASS!