Pairing Beer and Food for Fall! In Good Taste Magazine

Corinne Hanshaw of In Good Taste Magazine interviewed me recently about pairing beer and food for Fall and wrote up this great article! 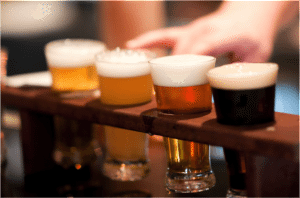 Fall has officially debuted and as it happens every year, taste buds begin to crave something new. Instead of craving cold beer and summer barbecue fare, pumpkin and stews are high on our radar.  This leaves a lot of people wondering how to pair beer with fall flavors.
We had the pleasure of interviewing Chef Eric Jacques Crowley, owner and chef instructor at his cooking school, Chef Eric’s Culinary Classroom in West Los Angeles, about how we can incorporate one of America’s favorite beverages: beer with fall flavors. We also shared some of our favorite fall dishes with Crowley and not only did he provide us with some stellar beer pairing suggestions, but he gave us the why and the how, too.

YOUR GUIDE TO FALL BEER PAIRINGS

BUTTERNUT SQUASH
Pair a butternut squash soup with an ale, like Allagash Fluxus. You can roast the butternut squash in the oven before making the soup, if you wish to get a darker, sweeter soup, which the beer’s rich flavor will complement. You could also substitute some of the vegetable stock in the recipe with beer if you wish to cook with it. Pro Tip: you don’t want to roast the squash with the beer, because the beer would introduce too much liquid to the process and create a steaming effect.
TURKEY
Sam Adams Boston Lager is always a good option to when pairing or making anything with turkey. “This beer has the full body to stand up to the rich roasted turkey flavor, yet a crisp finish that won’t be too overwhelming on the palate as you progress through the meal,” said Crowley.
APPLE
Apples are abundant during the fall season. “I would use any fall-spiced beer that contains cinnamon and clove, like Ommegang Scythe and Sickle. I always think of cinnamon and cloves when I think of cooking apples,” said Crowley.  Applesauce, baked apples, apple pie all use cinnamon and cloves, which elicit the sweetness from apples while balancing tart flavors.
MAPLE
Bruery Autumn Maple pairs perfectly with any maple flavorings. “When I am pairing a beverage and a food, I often look for a complementary flavor profile,” said Crowley. “Autumn Maple is a great match for a burger with maple bacon on it or something really sweet, like a dessert waffle with maple syrup.”

CHILI
Whether you’re drinking the beer or pairing it with the chili, use a pilsner or lager. “My dad uses Corona in chili and it tastes great,” said Crowley. “He uses one bottle of Corona beer for every gallon of chili and I find that the light, crisp body of a beer like Corona adds a nice contrast to the rich, meaty spiciness of the chili.” If you have some leftover, drink it cold with your finished product, too.

SWEET POTATOES
Bruery Autumn Maple is great with sweet potatoes, too. “This beer complements the best way I know how to serve sweet potatoes. Whether they are mashed, roasted or baked, I often think of maple syrup,” said Crowley. “I also make a sweet potato pie that this beer complements the flavors of very well.”
PUMPKIN
Make pumpkin ravioli with pumpkin beer dough and cook the ravioli in pumpkin beer.Southern Tier Warlock from Lakewood, NY is a great beer for this flavor profile. By making pasta with the beer instead of eggs, and then cooking the ravioli in additional beer, you will build up the pumpkin flavor profile in this dish. That, in turn, will be further complemented by serving the same beer with the finished meal.

SOUPS AND STEWS
Use a beer that complements the soup. For a rich soup, use a rich beer. For a light soup, use a light beer. For a soup like French onion, an amber ale, such as Full Sail Amber Ale, will stand up to the richness of the onions and cheese and enhance the flavors. This soup is also traditionally made with a beef broth and the full-bodied-style of Full Sail will pair well with its rich flavor. For a lighter soup, such as a vegetable soup, Sam Adams Noble Pils will work well with the vegetables, due to the lighter style of pilsners. It is a natural complement to the lighter, cleaner broth-style flavors found in a vegetable soup and won’t overwhelm it. It brings out the many flavor profiles in the vegetables and enhances their natural tastes.
FALL SPICES
Find a beer that uses cinnamon and/or nutmeg, like Dogfish Head Pumpkin Ale for any dish heavy on nutty spicy flavor. “My traditional German spaetzle in Emmentaler cream has a nice hint of nutmeg that the ale complements nicely,” said Crowley. “Also, I often serve pumpkin pie at Thanksgiving and this beer is a natural choice. Not only does it have cinnamon added to it, but it is also made with pumpkin.”
Both the flavors of the pie and the beer pair up to enhance the flavors of the food and the brew. The use of these spices in the brewing process helps to complement and bring out these spices in a recipe because the same spices are being used in both the recipe and the beer. The flavor profiles are similar, so they work together to create a wonderful taste on the tongue.

FOUR QUESTIONS FOR CHEF ERIC JACQUES CROWLEY
IGT: What is your personal favorite fall beer?
EJC: One of the local breweries near Los Angeles has a great ale, Foliage Pale Ale by Enegren Brewing in Moorpark, CA. They are a small brewery and they have great tasting ale. You should also try their Valkyrie IPA and if you are ever in Moorpark, feel free to stop by and ask for a [complimentary] tour.
IGT: Do you have any suggestions for pumpkin beer?
EJC: Yes, Sam Adams Harvest Pumpkin is widely available and the brewers there get beer right more often than small craft brewers do. While some beer enthusiasts feel that Sam Adams is a comparatively large brewery, they still make a great selection of well-crafted and creatively flavored beers.
IGT: If you could choose one beer to pair with your Thanksgiving dinner, which one would it be?
EJC: Either New Belgium’s 1554 or Sierra Nevada Tumbler Brown Ale because they will complement the many favors of the meal. Since there are so many different dishes ranging from green beans to sweet potatoes and dinner rolls to stuffing, you need a beer that can fit well with the flavors of all of these dishes, as well as the turkey itself.  These two examples offer a strong, but not overpowering flavor profile to work well with not only the turkey, but the mashed potatoes, gravy, stuffing and many other dishes you will find at Thanksgiving. Should you drink a beer that has a specific flavor profile, like an Indian Pale Ale with its powerful hop character, then all you will taste is that specific flavor.
IGT: Are there any Fall recipes that contain beer that you recommend?
EJC: My beer-braised pork loin is awesome and is a great Sunday night meal (recipe below). Feel free to make this with a stout, like Guinness, or an ale, like Red Tail. I have also made this with a rich lager, like Kirin, with great success.

I had a great time in your class Eric. You’re a terrific teacher- patient, knowledgeable and fun. I plan on taking another class soon.

The biggest change for me is having more confidence in the kitchen – which leads to trying things (with a higher success rate!) and having the courage to “whip something up” on short notice.

I’d developed a flair for Baking, and used to do tons of it at home. I was looking at doing some professional Baking courses when I came across Chef Eric’s Culinary Classroom Master Baking Program. I’m glad I chose this program as the course was really detailed and focused on the right techniques and helped me fine tune my Baking. Since then I’ve moved to Bangalore, India, however I’ve kept in contact with Chef Eric and he still helps me answer my Baking queries.

Thank you very much for your hospitality – we will definitely be recommending your Culinary Classroom to friends and colleagues.  We look forward to working with you again.

Sheldon and I want to thank you for a wonderful evening. Your enthusiasm and supportive nature made the class really fun. We look forward to taking more classes.

Chef Eric and Staff~ Thank you so much for the class Larry and I took. We talked about it the whole weekend. You and your staff are so very special and I cannot wait to take another class from you. I just wanted to say thank you from the two of us.

First of a four part series...so far it has been an awesome experience. The class is fun, interactive and relaxed!

I had a great time with all of you and thanks so much to Chef Eric for providing such a great learning environment and outstanding instruction.

An enjoyable afternoon. Clear instructions and guidance generously and humorously given. Will be back.